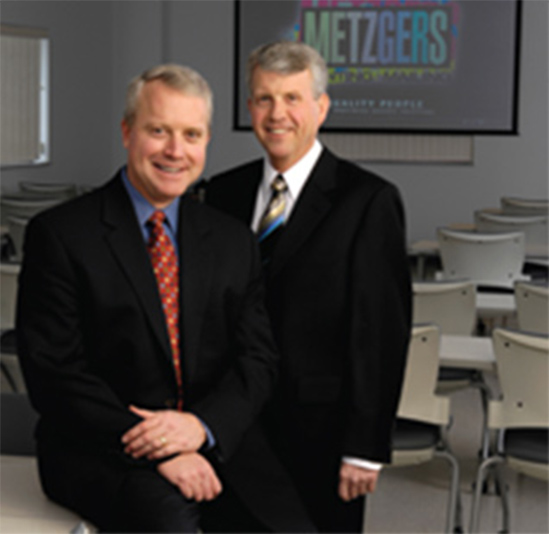 Together, Joe (left) and Tom Metzger built on the founding mission and vision that made the family printing business quite unique.

We were saddened to learn that Joe Metzger had lost his struggle with cancer. Joe was a friend to RM Machinery, Mitsubishi before that, and to all of us in the commercial printing industry.

Many words come to mind in describing our friend: president, co-owner and self-proclaimed “sales and idea guy” of Toledo, Ohio-based TJ Metzgers Inc. Joe was all that, of course, but so much more: husband, father, coach, business leader, visionary.

Working side by side with his brother, Tom, Joe spent the past 30 years building the family-owned business into one of northwest Ohio’s largest and fastest-growing printing companies. The company originated as Type House, founded by Tom and Joe's father, Norb. The brothers took over daily operation of Metzgers when Norb retired two decades ago.

An advocate of sustainable printing practices, Metzgers became the first Toledo printer to earn chain-of-custody certification from the Forest Stewardship Council. Among his numerous professional achievements, Joe was inducted into the Printing Impressions/RIT Printing Industry Hall of Fame in 2010.

Joe approached his illness with humor, grace and courage. He launched a blog in 2011 as a vehicle for sharing how he personally confronted his battle.

We join others in sending warm thoughts to Dana Metzger, Joe’s wife of 25 years, and the couple’s four children, John, Mark, Kevin and Kelly.

You can read more about Joe Metzger’s life at http://www.toledoblade.com/Deaths/2014/05/07/Print-shop-co-owner-grew-family-business.html.